Today I was glad to see the sun when I awoke and at the breakfast table, the ladies were ready for a full day of sightseeing, whilst transferring from Newport to St David’s. The rain and winds of yesterday has certainly not dampened their spirits!

With bellies full and bags loaded we set off in search of the 5,500 year old burial chamber of Pentre Ifan, the ancient manor in the civic parish of Nevern. This is the largest and best preserved Neolithic dolmen in Wales. 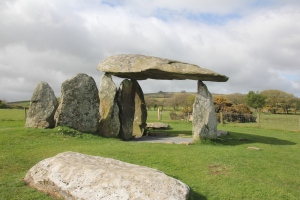 The pillars and capstone represent the portal to the communal burial chamber, which consisted of a mound of stones and earth, which have long since been scattered across the site. It’s incredible to realise that man stood at the same spot fifty five centuries ago!

After this we headed for the coast and further north for now, in search of the famous Witche’s Cauldron. After a missed turn on the main road, I decided to take the next left that we came to and after a considerable distance (3/4 miles) we were on a very narrow track, not quite unadopted but with a distinct strip of grass and moss running down the middle, a definite sign of little use. It was a fortunate mistake as the lanes were idyllic and laden with flowers coming into full bloom. Possibly the best sight of the day, was an ancient farm or smallholding: unmodernised, unkempt, old worldly and full of unusual and rare breeds, that pretty much had the rule of the road. Peacocks displaying their full finery, ducks and geese that I couldn’t name, a Rooster strutting up the road in what appeared to be cowboys chaps and the cutest little lambs, eager to suck your finger. Delightful! 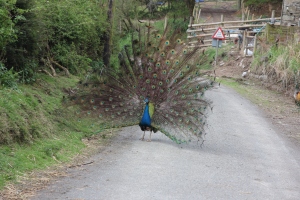 We tore ourselves away and eventually passed through Moylegrove and emerged by the coast at Ceibwr Bay.

This is certainly one of the best parts of the Pembrokeshire Coastal Path. Ceibwr Bay – (The cliffs here are famous for their amazing strata produced in the Caledonian period 450 million years ago.) Once parked, we followed the coast path south to a dramatic bay known as the ‘Witches Cauldron’. A wonderful spot for bird watching with Gannets, Choughs, Gulls, Fulmars, Shags, Cormorants, Buzzards, Ravens, Oystercatchers and Guillemots. The Witches Cauldron is a collapsed cave and at certain points of the tide the water makes wonderful noises as it is sucked under the narrow arches of rock. It is possible to enter these caves by Kayak when conditions are calm at low tide. 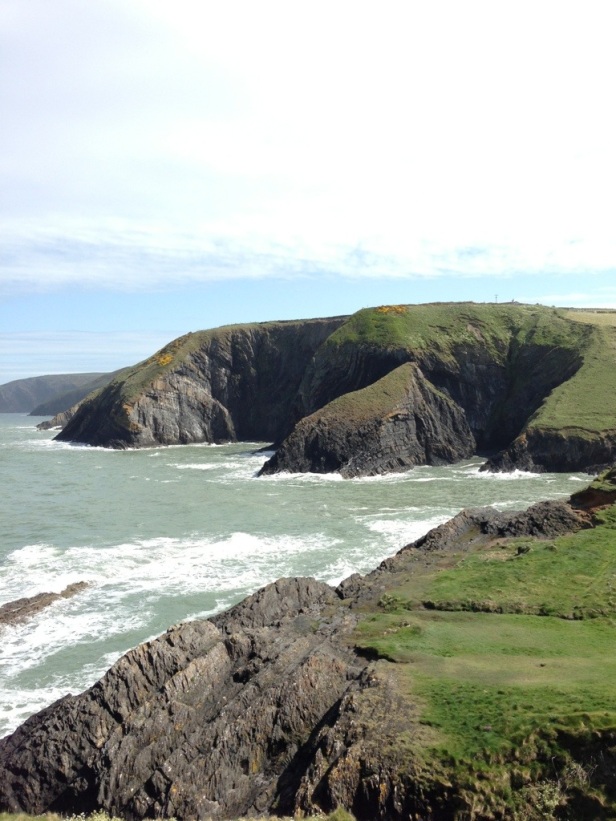 Next we headed south towards Fishguard. Our next stop was the working woollen mill of Melin Tregwynt to see the wonderful process involved with producing local products and a great place for the ladies to carry out some souvenir shopping. Highly recommended stop!

So now our stomachs are rumbling. Time to find some food. One of the ladies, Jan, has been recommended a place by a fellow Minnesotan. A fish and chip restaurant in Porthgain called The Shed. I have to say that I’m partial to this typical British meal, so I was game. The place is cute and welcoming, right next to the peaceful harbour. I had the beer battered Monkfish, which although a very generous size, was gone in a flash. The ladies were very happy with their choices.

After this satiating lunch, it was time to finally head to St David’s but, we remembered that we needed to visit another Dolmen: Carreg Samson. This Neolithic burial chamber stands in splendid isolation overlooking the bay. The capstone is supported on three of the seven upright stones, and the whole structure was once covered by a mound of earth or stones. 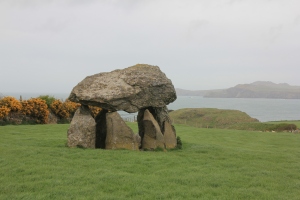 Another eight miles and we arrive in the beautiful city of St David’s, Britain’s smallest city. The cathedral itself is the resting place of Wales’s patron saint, several of the early bishops and Henry VIII’s grandfather. After checking into our hotel for the next 3 days, we take a walk to visit the cathedral and the ruins of The Bishop’s Palace. Through the recommendation of a friend I introduce myself to the Canon, Dorrien Davies, who happens to be passing by and next minute were invited to join Evensong & Vespers, which are about to start. A wonderfully inspiring daily event, taking place in a place of worship founded in the 6th Century. An unexpected but welcome end to an event filled day! 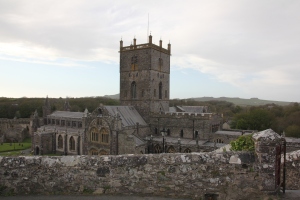