It’s Thursday and so we will try to get to Ramsey Island again and experience a circumnavigation of the island as well, with Thousand Island Expeditions.

We did not need to ring the office to check on viability as it was a glorious day, the sea by St Justinian’s lifeboat station was calm and clear and not a breath of wind in the air. 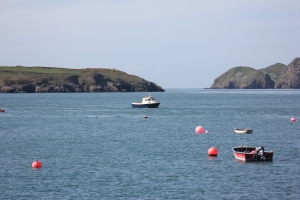 With tickets pre-booked we arrived with plenty of time to spare and have a look around the lifeboat station and see the boats in operation, albeit just practice thankfully.

St Justinian’s has an all-weather, 14.3m Tyne Class lifeboat in the boathouse, which is elevated and launched from high above the sea, to allow for difficult sea conditions. The lifeboat is named “RNLB Garside” and weighs in at 26 tonnes, with 2 General Motors six cylinder diesel engines generating around 750HP and a working speed of 17.5 knots. This boat can self-right itself if capsized with 10 seconds and cost in the region of £530,000 to build. She has been on the station since 1988. 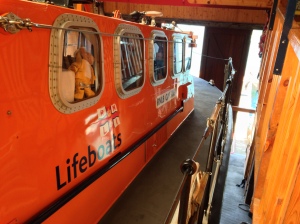 St Jusinian’s is in the enviable position of also having a brand new all-weather, state-of-the-art, 16.3m Tamar Class lifeboat, which will be based in a brand new boathouse in the neighbouring cove. The lifeboat is named “RNLB Norah Wortley” and weighs in at 32 tonnes, with 2 x 1001HP Caterpillar C18 diesel engines, generating a combined 1800HP, which is restricted to 1700HP and a given speed of 25 knots, although I’m told be one of the crew members that they’ve had it up to 29 knots in calm conditions. The noise of this incredible boat is exhilarating, which is evident as the crew are bringing her around to refuel whilst sea conditions are favourable.

That’s the boys stuff done. Time to get these lovely ladies on to the Gower Ranger for a tour of Ramsey Island and then a hike around the RSPB (The Royal Society for the Protection of Birds) nature reserve itself.  As we leave shore aboard the Gower Ranger, the Norah Wortley, is waiting for us, as we have a lifeboat crew member to drop off. Our captain challenges the Norah Wortley to a standing start. We do ok to begin with but soon are outstripped by the lifeboat, even with it weighing 10-15 tonnes more.

As we approach Ramsey Island and the landing stage, we start our clockwise circumnavigation of the island. The first task is to navigate the Bitches & Whelps – a natural reef, weir and damn all in one, protecting Ramsey Sound from the open sea. The current here is incredible as the sea pours over the reef, delivering millions of litres of sea water per second at up to 18 knots. The difference in sea level across the reef can be up to 1.5m and runs for 6 hours in each direction. Understandably, there have been many shipwrecks over the years, including one involving the RNLB Gem lifeboat in 1910, where 3 crew members lost their lives. 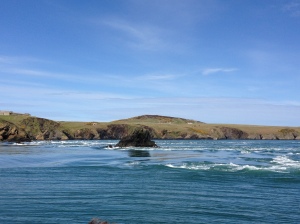 After we leave the Bitches & Whelps behind us we have to navigate the Devil’s Hole, a bubbling cauldron of cross currents and heavy swell. It’s like a roller-coaster ride! We begin to weave our way through the coves, inlets and passageways between overhanging rocks with plenty to see at every turn. Seals aplenty basking on a beach and bobbing their heads up around the boat, tempting us for the perfect photo shot, only to duck under the surface just as you’re about to shoot. The cliffs are covered with line after line of Guillemots, Razorbills and Kittiwakes in particular and rafts of birds here and there busy with their fishing trips. The scenery all around us is stunning. I highly recommend this tour as it’s a highly entertaining hour and a half and very good value for money. 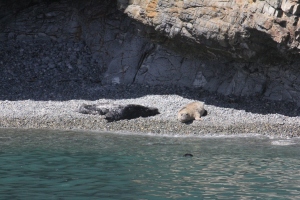 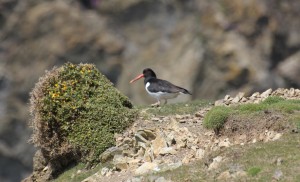 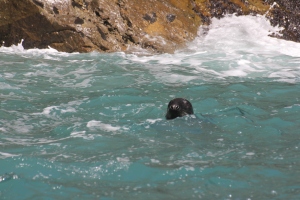 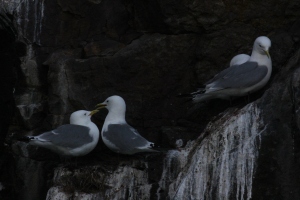 At midday we land on Ramsey and are left to our own devices for 4 hours, to explore and investigate. We head north in search of Raven, Chough, Buzzards, Oystercatchers, Owls, Wheatears, Red Deer and any other migrant birds that may be passing through. Did I mention what a glorious day it is? We have been truly blessed when we compare to the weather of the previous few days.

So what did we see? All of the above and more: a Ringed Plover (not on the RSPB list of sighted birds – my scalp!) and a baby shrew playing around in the sunshine, seemingly oblivious of our presence. It was quite unusual to see Red Deer on such a small island and looking quite shaggy with their moult.

I’m very happy that the ladies had such a wonderful trip around the island in such favourable weather. 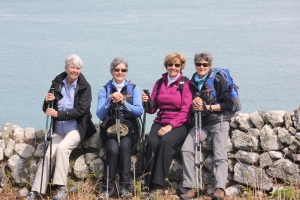 A great day out!